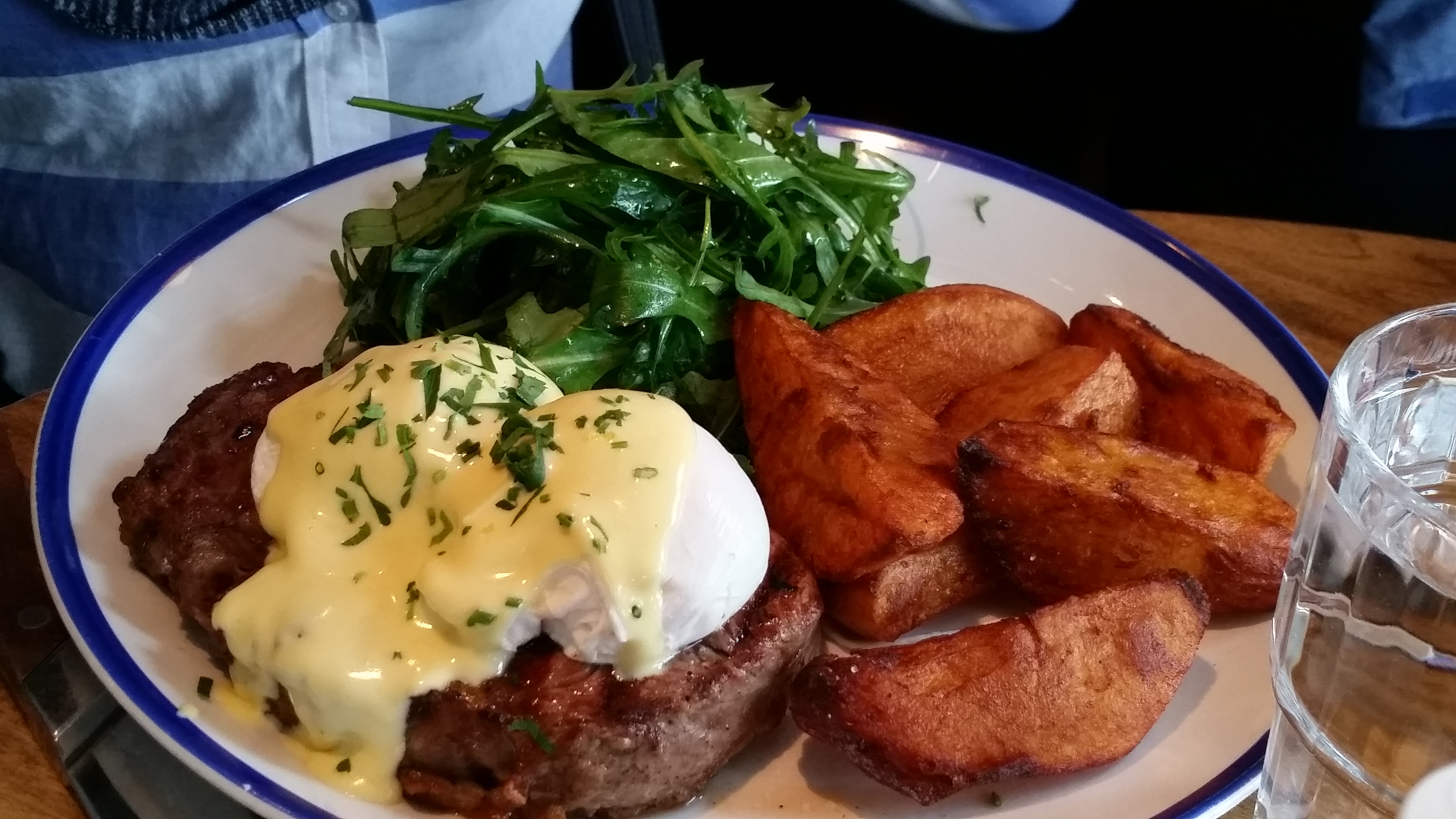 Dublin in March is chilly, rainy, and cloudy. Apparently it’s like that mostly year-round. Regardless I had a great time and was able to stay longer to celebrate St. Patrick’s Day with the locals. Every place we went, from pubs to museums, everyone was so welcoming and friendly. The highlights of the trip to Ireland were the Guinness brewery (my favorite beer), Jameson distillery (my favorite whiskey), the Cliffs of Moher, the Giant’s Causeway, and visiting with my baby sister (Yes, she will always be my baby sister even though she’s in her mid-20s…ha!). Now on to the important part — the food. If you are ever in Dublin, find your way to these restaurants.

Crackbird: This was my first stop for lunch upon arrival in Dublin. We were the first to arrive, so admittedly I was skeptical. My mindset was changed completely after indulging in the fried soy garlic chicken with hand-rolled croquettes and slaw. The farm fresh chicken was moist inside and crispy outside with flavor throughout. The hand-rolled croquettes were balls of lightly breaded mashed potato — in which I quickly learned Ireland loves their potatoes! The service was as attentive as they could be when the restaurant is half empty (if you get my drift). All in all, good solid food and drinks. Here’s a small tip (pay attention): the chicken tastes even better eight hours later cold in the back of a taxi…I held on to that box with my dear life throughout the day pub hopping.

Dillinger’s: Can you say best brunch ever (in Dublin)?!?! I swallowed the Eggs Benedict with perfectly poached eggs, English muffin, smoked salmon, spinach and hollandaise. The other items on the table were the Shakshouka (baked eggs with Merguez sausage, feta, swiss chard, spinach and tomato sauce) in a cute mini-iron skillet and Steak-and-Eggs (char-grilled hearty ribeye with poached eggs, brown crispy home fries of heaven, salad and Bearnaise sauce). To compliment the meal, we shared a bottle of Prosecco with three fresh fruit purees — orange, peach, and pear. You have to stop here! Recommend to make a reservation for brunch because it stays busy and full.

Bunsen: Let’s start with the bun — toasted and soft semi-sweet Amish dinner roll. The ground beef — Angus and bred in Ireland. The menu is simple with no frills. You have the choice between the shoestring, hand-cut or sweet potato fries. I chose shoestring which were actually regular sized fries (American size). The burgers and fries were so good, that I ate there twice. Our server was super-friendly and patient….she had cool clear glass frames. The lunch crowd is huge but it moves pretty efficiently and you can call-in your order for “take-away”.

DeSelby’s: DeSelby’s is a cute small cafe-style restaurant with two friendly guys behind the counter; one wall had various wines to choose from and the opposite wall was shelved with Keogh teas. I was lucky to stop by on the day they had oxtail soup, which is one of my favorite meats. The soup was thick, rich, and filled with shredded melt-in-your-mouth oxtail. The only thing missing that would of made the soup even better was fried plantains as a side dish. The popular dish seemed to be the fresh crab meat with lemon and basil on sourdough bread and a side salad. It looked very delicious — as vouched by my lunch partner. Granted Dublin’s idea of a salad is arugula drizzled with olive oil-based dressing and random toppings. I stayed away from it, since I vowed to not eat salads on vacation and I stuck with that vow. The meal ended with a homemade cinnamon roll of goodness.

Rustic Stone: This Dylan McGrath restaurant somewhat lived up to it’s reputation. I had the 8oz filet topped with mushrooms and tarragon; and the others had the 8oz ribeye with prawn glaze. Our meat came out on a sizzling stone so we could cook the meat to our liking. It’s a cute concept. My filet was delicious, but both ribeyes looked smaller than the normal cut and very fatty, not marbled as expected. Some may not mind the fat, but it lend to it getting cold quicker even on the stone. My side was refreshing — avocado, tomatoes, courgette (zucchini), sprinkled with fresh coriander. The highlight of the entire meal were the sticky soy chicken wings as a starter! I’m sensing a theme — soy and chicken — a great combo of flavors. You’ll want to order the full size, trust me.

Zaytoon Persian Cuisine: Zaytoon is a popular spot with the locals. I graced them with my presence twice, maybe thrice. One was a late late night….haha! Their house specialty Barg (marinated beef fillet) and Kubideh (minced lamb and beef) wrapped in pita bread and topped with “salad”, chili, and a dash of garlic sauce were oh so delicious. The chips (french fries) were great too!

Herbstreet: The first thing I remember is the sweet waiter we had….full of contagious smiles. The second thing is the divine breakfast of sausage, short-stack blueberry pancakes with orange honey butter on the side, and poached eggs, washed down with Earl Grey tea and milk. They were not your ordinary fluffy pancakes, instead they had a dense consistency so I could only get through two. The view of the Grand Canal Dock was an added bonus. Next time I’ll try one of their homemade desserts.

Sister Sadie: In a nutshell, this is a cute house turned into a restaurant serving healthy food and baked goods. I enjoyed a hearty shredded beef sandwich smothered with pesto and soup.

Klaw: Oysters on oysters on oysters! I walked in wanted a lobster roll, which was okay and small compared to what I’m used to eating in Boston…could have done without the buttery toasted roll. I’m not complaining about the portion, rather the wasted space on the roll. The oysters were delicious and fresh. We ordered a sampler of oysters from Waterford, Doon Castle, Galway Bay, and the Flaggy Shore served dressed, torched, or naked. My fav was the Galway oysters — rich, buttery and slightly salty. TIP: it is cash only!

Fogo’s: I found this place looking for a snack before dinner to quench my hangryness! I went in thinking I was going to grab a slice of pizza or something quick. I ended up bargaining for two fried chicken drumsticks only. This was very tasty well seasoned chicken, meaning the meat was seasoned not just the skin which I do not eat. It was all gone within seconds! If you’re walking down Aungier Street, do not let the shabby outside keep you from dropping in and when you do, order the chicken.

Brookwood Dublin: Brookwood was my last  dinner in Dublin before heading home the next morning. My 8oz filet was just a good as the one from Rustic Stone, if not better. I also had onion rings, which were huge, crispy, and not soaked in oil. I can’t stand when onion rings are drenched in oil because it just ruins the flavor of the batter and onion. We ordered a bottle of Corte delle Calli Prosecco that barely made it to the end of the meal. That should speak for itself.