Best Places to Eat in Budapest on a Dime 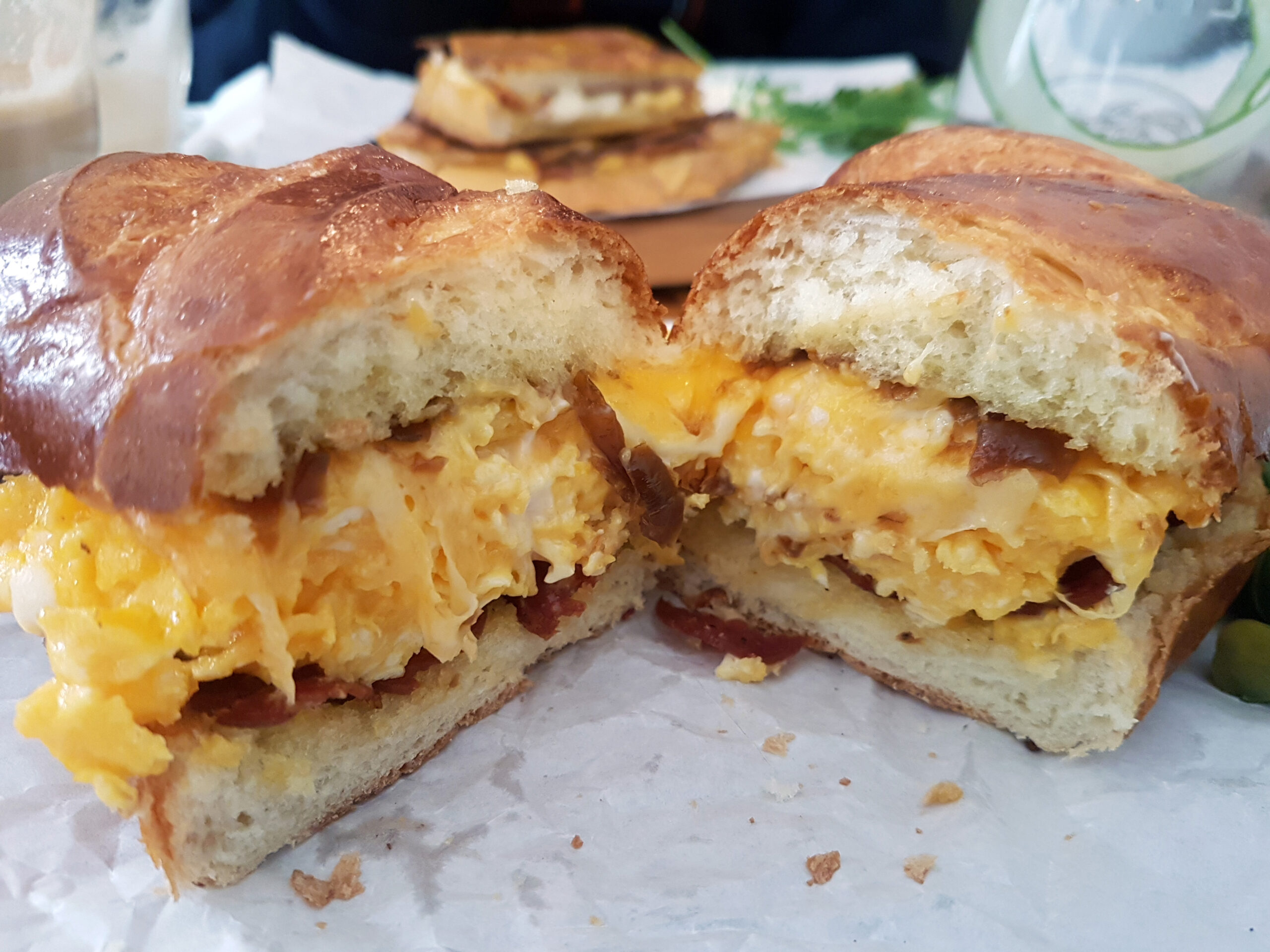 Budapest has been on my must-visit list since forever and it did not disappoint. After blessing them with my presence, I’d love to do it again so I could try more of the native cuisine and explore more of the beautiful architecture.

First to get from the airport to your destination (if it’s city centre), I recommend jumping on the BKK (Budapesti Közlekedési Központ) shuttle bus line 100E that runs every 30 minutes. The ride took about 40 minutes to Deák Ferenc square. I suggest purchasing a round trip ticket from the ticket machine by the bus stop which costs about 900 HUF for a single trip. There is a BKK app you could use to purchase a mobile ticket also. HUF (Hungarian Forint) is Hungary’s official currency, but they also do euros. I’d suggest paying in HUF if you can because you’ll save money (it’s cheaper). I usually never exchange money before travelling, but I did this time around for this reason—to save money.

Of course we visited Castle District which was great and all. But on the way out, you’ll never guess who I spotted (you actually would never guess haha). My eyes locked eyes with Pablo Schreibe who is most known (to me at least) as “Pornstache” on Netflix’s Orange is the New Black. I probably freaked him out a bit because I kept staring at him all puzzled thinking I knew him from somewhere. You know when you recognize a face and cannot remember where from. We did manage to sneak a pic (that failed because he saw us) just so we could look him up later. Anyway…moving on.

I just have to mention that I swear on every block there was a barbershop, thai massage, and kebab spot in a row. Not sure what that was all about but if anyone reading this knows, do fill me in. So here’s what we did…

Szimpla Kert: This ruin pub located in the Jewish quarter is like a magical winter wonderland without the snow. It’s just a crazy mish mash of retro cars, plants, tables, bars, chairs, music, drinks, and bright colourful lights within rooms and rooms from floor to floor. Szimpla looks like a converted old factory with loads of character. There is live music at least three times a week and a buzzing farmers and flea market every Sunday. I was lucky enough to catch a few local musicians on stage and the market. Some of the bars do a refillable cup system where you pay a one time fee for a memorabilia cup and then your drinks are discounted a bit. The drinks generally are at reasonable prices and the local beer is quite delightful. If you don’t get to this ruin pub (which is apparently the oldest), do try one of the many others in Budapest.

Meatology: Let’s just get to the point—I had the best sausage ever which was mixed with the perfect ratio of pork and beef. The sausage plate was called Mangalista Debrecziner which consisted of a pair of homemade mangalitsa and hungarian grey cattle sausage, fresh mustard, horseradish, and flatbread. We had it for our dessert. The main dishes were crispy roast duck with gnocchi, orange curry cavalo nero, and Maltaise sauce; and a succulent brisket special with potatoes and pickled vegetables. All three meats were chock full of flavour, especially that damn good sausage; but the sides were meh. I just can’t get over it!!! There are two locations and we accidently ended up at the smaller one with a few tables. The wait staff were really friendly and helpful because you already know I had a bunch of probing questions. We tried the lager and stout, but I preferred the lager. I’m too much of a Guinness and Tontine fan and their stout wasn’t cutting it for me. Regardless, try this spot out if you want tasty MEAT.

Kaptafa: Kaptafa is a hip cosy breakfast spot obviously catering to tourists although there were a few locals when we were there. It’s located on Akácfa Street in the so-called party district. The star of the show was this breakfast sandwich called the Defibrillator/CPR—savoury french toast stuffed with bacon and melted cheese. It’s apparently a good hangover cure. The runner up was the Mr. Molnár which looked like a Hungarian version of a Croque Monsieur made with a soft sweet bun filled with scrambled eggs, cheese, caramelized onions, and fried sausage crisps. The cappuccino was so smooth and tasty. This wasn’t the best breakfast I’ve ever had but it did hit the spot for a low cost in a quirky cafe.

Comme Chez Soi: My brother recommended this restaurant and he didn’t steer us wrong. My siblings rarely do (it’s the greedy gut in us). From the phone call when I made the reservation to my happy bounce leaving the restaurant, it was a feel-good experience that I’ll never forget. Chef Roberto was very attentive and enthusiastic with everyone in this intimate small restaurant. The staff mimicked the chef’s happy demeanor. We ordered the popular grilled shrimp with butter and olive oil; and beef tenderloin carpaccio with parmesan for the first course. The main courses were seafood pasta (spaghetti with sea fruits) and red wine beef stew. The seafood pasta with large prawns, mussels, and squid was mixed with olive oil/butter, not the usual soaked in marinara sauce. I definitely prefer it this way because it allowed the flavours of the pasta and seafood to shine, instead of being drowned by red sauce. And for dessert we had tiramisu. This experience was one to remember, including the delectable food from beginning to the end. Here are two tips to keep in mind—make a reservation and bring cash!

London Coffee Society: If you are looking for a simple breakfast, drop by London Coffee Society. There seems to always be a wait but it doesn’t last too long. Grab a table first and then order at the register and they’ll bring the food to you. While you’re waiting, take a look around and enjoy the architecture of exposed brick walls, spiral stairs, wooden tables, metal bar stools, and industrial lighting fixtures. The menu varies from cakes to eggs benny. We ordered the number 4: Ana Capri—scrambled eggs, serrano ham, mozzarella, and tomato on sourdough toast. I have to point out the cappuccino and how tasty it was due to the slight sweetness which I assume was from the milk because I never add sugar. If you don’t like being crammed up and constantly having to say excuse me, then it’s not for you (but it may be worth it haha).

Hoppacska: Hoppacska is a touristy burger spot located not too far from Kaptafa. First of all the images on their extensive menu do not match what was actually being served on the plate. We tried the Maple Bacon Burger with angus beef, maple glazed bacon, peanut butter, and raspberry ketchup; and the Classic Burger with the infamous Hungarian grey cattle patty, cheddar, bacon, pickled cucumber, ketchup, mustard, and sweet chilli sauce. Both were served with skinny fries and coleslaw. The burgers that came out looked interesting (unusual). Yep just interesting and nothing like the juicy tantalizing images on the menu. The burgers tasted just okay, but luckily the fries saved the day. In a nutshell, I do not recommend wasting your precious minutes unless you are trying to get over a hangover and need any kind of substance.

Flour Style Wok Bar: We decided to take a stroll through town as we couldn’t settle on what to devour and landed at Flour Style Wok Bar. The restaurant is pretty large with plenty of seating. Most of the menu includes wok dishes with any carb you want from white rice to glass noodles and the protein of your desires. We tasted the Pork Ramen with egg noodles, pork, egg, carrots, bean sprouts, mushrooms, and vegetables; and stir fry with beef, shrimp, glass noodles, vegetables, and chilli sauce. Both dishes were better than expected, so it was worth the blind try. 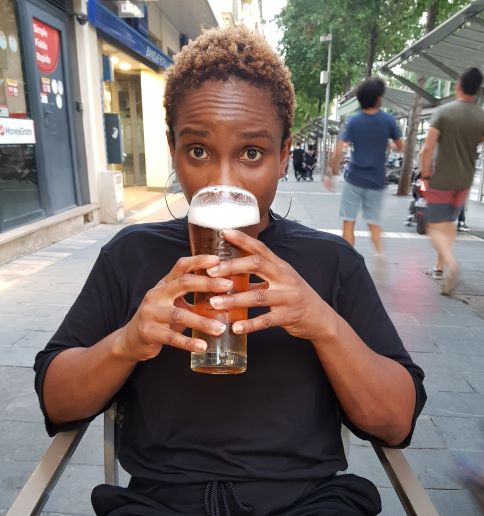